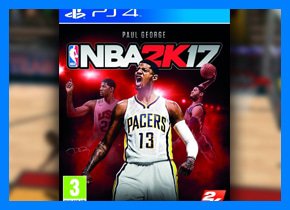 NBA 2k is a basketball series of simulated video games that has been in existence since 1999. The game is a mimic of the National Basketball Association whose initial publisher was Sega before selling it to 2k Sports. It's great to play for fun or for money.

Each installment is released yearly. For instance NBA 2k was launched in November 1999 while the NBA 2k1 was released a year after in November 2000. This has been the case with all the 18 installments.

All the NBA 2k game series are a simulation of a real basketball game. The player has the ability to control a player as well as the entire team.

For the NBA 2k games there are always improvements with the new versions over their predecessors. In ESPN NBA installment the cover athlete was Allen Iverson while the ESPN 2k5 had Ben Wallace as the cover athlete.

The cool thing about this game is that it features basketball historic figures and their teams which you can use to play your tournaments and leagues. NBA 2K12 has the "NBA's Greatest" mode, where gamers can choose from a range of historic players as well as teams for their gameplay.

NBA 2K modes have been changing with the constant upgrades. The career mode which is a feature that cuts across all the 18 installments was initially known as 24/7 then changed to My Player then modified to My Career. The career mode allows gamers to customize characters while MyTeam mode is used for team building. In most games of the NBA 2K series, there is a mode that allows a player to participate in a slam dunk contest. For NBA 2K11 specifically, it features the Jordan Challenge mode where enthusiasts are tasked to reach the legend's records such as scoring 69 points within a single game.

Like in all games, NBA 2K is level based where players can upgrade their character's attributes in their play. They can also take part in off-court activities. For the levels, high school and college levels are present in the game.

All the games in the series feature details found in real NBA games. In the NBA 2K11 game for instance commentaries from Clark Kellogg and Kevin Harlan, reporting by Doris Burke, half times and replays are all simulations of the NBA games.

There are 18 installments in the NBA 2K series. Some of them include:

The best seller of the series was the NBA 2K14 which sold over 7 million copies while NBA 2K16 scooped the fastest selling. Within a week of its release over 4 million copies had been sold.The NBA 2K series has been subjected to praise and criticism since their release, the success of the game has been attributed to:

Failures are quite minimal and were due to the technical issues that were experienced by online components. The game was nominated for multiple awards such as The Game Awards and Spike Video Game Awards and was ranked as best sports of the year. The game is highly popular among many players and lots even bet on NBA2k for real money at esports betting sites.